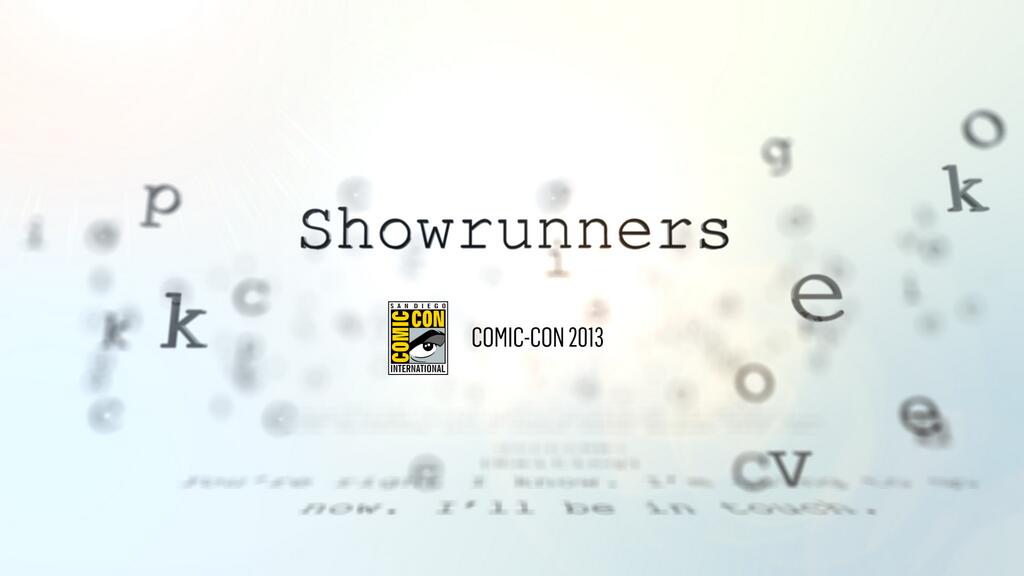 There was some big news yesterday for Showrunners, the film I’ve been cutting for the best part of this year. On Friday the film hosted a panel discussion at the San Diego Comic-Con featuring contributors Bill Prady (The Big Bang Theory), Hart Hanson (Bones) and Jane Espenson (Husbands) from the film as well as Director Des Doyle, Producer John Wallace and co-producer Ryan McGuffey.

The panel was on the topic “Showrunning – the hardest job in the entertainment industry” but it also served as a platform to make some announcement s about the film. The biggest of which was reported in an exclusive article with Deadline Hollywood, which i have reprinted below…

With buzz heating up at Comic-Con over network shows and new series, indie documentary Showrunners is primed to capture the zeitgeist. Director Des Doyle nabbed interviews with some of TV’s biggest and brightest creators, including JJ Abrams (Lost), Joss Whedon (Buffy The Vampire Slayer), Bill Prady (The Big Bang Theory), Hart Hanson (Bones), and Jane Espenson (Once Upon A Time). Submarine Entertainment snatched up US distribution and worldwide sales rights on the Black Sheep Productions pic, which held its own panel today at the pop culture confab. “We are very excited to be working with Des Doyle and the team on their amazing behind the scenes documentary Showrunners, which reveals the seductive, yet terrifying, world of being in charge of running a television show,” said Submarine’s Co-
President Dan Braun announcing the deal. “The unprecedented access and attention to detail they achieved in this film is impressive and unique.” Showrunners takes a behind the scenes look at the writing, development, and production side of television from the captain’s chair. Project got its start with backing from the Irish Film Board and a Kickstarter campaign that grew fan interest online. Among the TV heads featured in the film: Matthew Carnahan (House Of Lies), Steven S. DeKnight (Spartacus: War Of The Damned), Chris Downey (Leverage), Mike Kelley (Revenge), Robert and Michelle King (The Good Wife), Ali LeRoi (Everybody Hates Chris), Damon Lindelof (Lost), Ronald D. Moore (Battlestar Galactica), Jeff Melvoin (Army Wives), Jeff Pinkner (Fringe), John Rogers (Leverage), Mike Royce (Men Of A Certain Age), Shawn Ryan (The Shield), David Shore (House M.D.), Janet Tamaro (Rizzoli & Isles), Terence Winter (Boardwalk Empire), and J.H. Wyman (Fringe). The Black Sheep Productions, Romark Entertainment, and Junto Entertainment production is produced by John Wallace and Rock Shaink. Ryan Patrick McGuffey co-produced the film and Jimmy Nguyen, Jason Rose, and Christof Bove are executive producers.