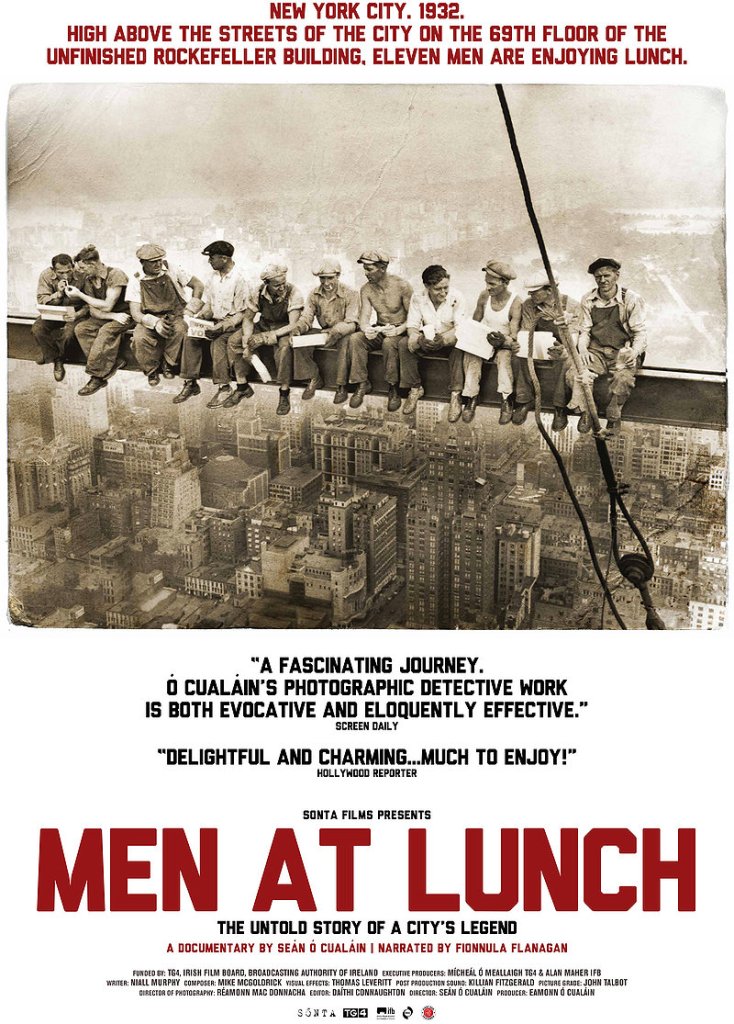 Directed by Sean O’Cualain, edited with great skill by Dathai Connaughton and shot in spectacular fashion by Ray MacDonnacha. I was privileged to be asked to do some additional editing for the US Cinema version. I was proud to do so and I think the film is great. Sean, producer Eamon O’Cualain, Dathai and Ray have made an excellent film and a beautiful love letter to New York.

The untold story of one of New York’s most iconic images of the 20th century opens in New York City on September 20 at the Quad Cinema.

Men at Lunch is the revealing tale of an American icon, the unprecedented race to the sky and the immigrant workers that built New York in the throes of the Great Depression.

In 1932 New York, the previous decade’s boom of Italian, Irish, and Jewish immigrants led to unprecedented urban expansion, and workers risked life and limb building skyscrapers high above the streets of Manhattan.

In Men at Lunch, director Seán Ó Cualáin tells the story of the iconic photo “Lunch atop a Skyscraper,” that is a definitive counterpoint of epic and mundane – and become a symbol of the indomitable working man.

Taken during the construction of the GE Building, the photo depicts eleven workmen taking their lunch break while casually perched along a steel girder – boots dangling 850 feet above the sidewalk of 41st Street – Central Park and the misty Manhattan skyline stretching out behind them.

For 80 years, the identity of the eleven men – and the photographer that immortalized them – remained a mystery: their stories, lost in time, subsumed by the fame of the image itself. But then, at the start of the 21st century, the photograph finally began to give up some of its secrets.

Director Sean Ó Cualáin explains, ”My brother and I were in an Irish Pub a few years ago researching another documentary when we noticed the famous “Lunch atop a Skyscraper” image with a note beside the picture from a Pat Glynn from Boston, Massachusetts. On the note he stated that the man on the far right holding the bottle was his father Sonny Glynn and the man on the far left was Matty O’Shaughnessy, his uncle-in-law. We realized very quickly that there was a great, untold story here. There’s the wider context – the glory of the skyscraper age and the building of the iconic Manhattan skyline—and secondly the parallel story of the European immigrants who arrived in New York during the roaring twenties and were living there during the Great Depression. Finally the mystery surrounding the photograph had to be investigated and told. Was it a fake? Who took the photograph? And, who might the men be?”