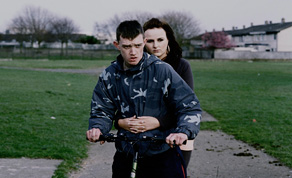 Well done to my good friend John Wallace. He knows how to back a winning pony…

The IFTA winning short film ‘Runners’ has won the award for Best International Short Film at th0e Malibu Film Festival and has been selected as a finalist at the Producers Guild of America’s Producers Challenge.

Directed by Ronan and Rob Burke, the filmmaking pair behind the award winning ‘Jellybaby’ and ‘Smalltalk’, ‘Runners’ centres around Derek, an eighteen year old drugs runner who is finding it increasingly difficult to juggle his ‘career’, having a relationship and family issues. The short recently walked away from the Malibu Film Festival with the title of Best International Short having also recently received a Jury Commendation at the 2010 Belfast Film Festival.

Furthermore the short has been selected as one of four projects that will compete in the Narrative Shorts category of the Producer’s Guild of America’s Producers Challenge. This is the second annual installment of the event which will give the chosen shorts and their respective filmmakers access to top professionals and the opportunity to win exceptional prizes. The four finalists will also have their work judged by top producers and screened at the Produced By Conference.

Rob and Ronan voiced their delight at the selection of their work for the event, telling IFTN: “We’re thrilled that Runners is getting such a great reception in the US, it was an honour to win at Malibu and being selected for the Producers Challenge is a great opportunity for the film to gain further exposure and for John Wallace in particular who will be attending the conference in LA and the screening at 20th Century Fox.”

‘Runners’ is written by Pierce Ryan (Jellybaby) and produced by John Wallace (Corduroy) for Black Sheep productions in conjunction with the Irish Film Board’s Signature’s Scheme. It stars Mark Butler (Song for a Raggy Boy) and Aidan Gillen (The Wire)

The Producers Challenge is intended to promote the work of emerging storytellers, spotlighting producers who demonstrate outstanding promise in their respective fields. The event will take place from June 4th-6th in Los Angeles.

May 20, 2010 by John Murphy Categories: Uncategorized Leave a comment