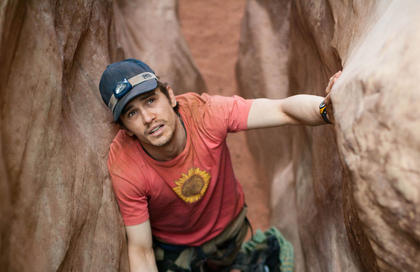 Back in 2003, Aron Ralston went canyoneering in Blue John Canyon. When a loose boulder wound up tumbling on top of him, crushing his arm, Ralston found himself alone and unable to seek help. After five days, he opted to resort to dramatic measures, cutting off the pinned appendage. Just reading a brief synopsis of Ralston’s experience is unsettling enough; imagine seeing the story unfold on screen. Apparently it was too much for some at the Telluride Film Festival because according to indieWIRE, two people required medical attention during screenings of Danny Boyle’s film 127 Hours, which is based on Ralston’s story.

On Saturday night, one moviegoer was taken out of a screening on a gurney and just a little later, another viewer suffered a panic attack during a subsequent showing. Here’s Fox Searchlight’s Michelle Hooper’s summary of the events:

From what I understand, an older gentleman was light-headed at the first screening (Galaxy) and the medics helped him calm down. Second screening at the Palm was a young woman (maybe 19 or 20) who had a panic attack. Paramedics attended to both people. I didn’t even know about the second incident until after the screening was over and someone told me (I was sitting in the first half of the theater).

Without belittling the individuals’ circumstances, I’m inclined to believe this is all just one big coincidence. For all we know this older man could have missed a meal prior to his screening and perhaps this young woman is prone to panic attacks. Without knowing the details, it’s difficult to blame 127 Hours for the occurrences.

There are tons of instances where viewers suffer health issues while watching particularly intense events unfold on screen. indieWIRE recalls the reaction to Pulp Fiction when it was screened at the 2004 New York Film Festival and vomiting during The Exorcist. There’s also the woman who suffered a heart attack during The Passion of the Christ. I’m sure that list can go on and on, especially now that 3D movies are running rampant and are legitimately making people sick, but I’m also inclined to believe that people must pass away or fall ill during movies all the time; we’re just hearing about these because of the nature of the material. Yes, THR may call 127 Hours “excruciating to watch,” but there are tons of productions out there that garner the same description.

We hope both people are feeling better, but don’t let their conditions deter you from catching James Franco’s performance as Ralston. According to the early reviews, this is one not to miss. Our own Eugene Novikov cites some weak spots, but says it’s “extremely effective as a thriller, and moderately so as a minor character study.”