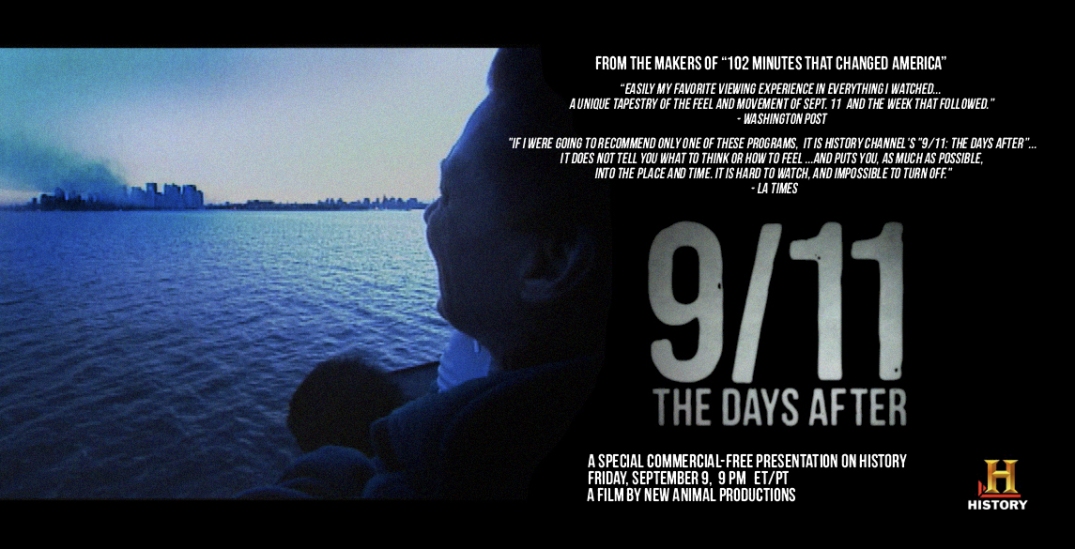 This is the documentary I was working on over the summer in the states. I was brought on to do some additional editing. The film, “9/11 The Days After” was made by New Animal Productions, who won an Emmy as well as a host of other awards for the film “102 Minutes that changed America” to which this new film is the sequel. The film was edited by Emmy award winning Editor Seth Skundrick, for whom it was a real privilege to work for. The man is, in editing terms a genius. I’m really proud to have been involved even in a small way with this astounding film.

The film premieres in a commercial free presentation on the History Channel this friday in the USA at 9pm. I have no idea when it will play here or in the UK. I’ll keep you informed.

Here’s what the Washington Post said about it. “Easily my favourite viewing experience in everything I watched…A unique tapestry of the feel and movement of Sept.11 and the week that followed”

And heres what the L.A.Times had to say “If I were going to recommend only one of these programs. it has to be History Channel;s “9/11: the DAYS AFTER” It does not tell you what to think or feel…and puts you, as much as possible, into the place and time. It is hard to watch, and impossible to turn off.”

2 thoughts on “What I worked on this summer…”