Final Cut X was a major disappointment, both in terms of its User Interface and also the perceived lack of respect it showed to broadcast editors. The Big story from NAB this weekend, in amongst all the 4K announcements was that there is a new player in the NLE market, its always been there but it seems they’ve been listening to what editors have been saying and have really come up something very interesting as this article from Creative Cow’s Walter Biscardi indicates…

It reminded me of a demo I saw back in 2001 of Final Cut Pro playing HD video with a Digital Voodoo card. Who was doing HD back in 2001? Nobody, but Apple designed an easy to use tool that was essentially infinitely flexible for whatever would come next.

Autodesk has taken that flexibility to the next level. Very quietly, with no fanfare, Autodesk set about creating the most powerful post production editorial and finishing tool I’ve ever seen. And they did this with the traditional editor’s needs in mind. I’m told this took about three years of work. They’ve completely shocked me with what they created because it was so unexpected.

For years, my number one complaint to the company has been the complexity of the tool. Smoke has always been the domain of visual effects artists and those with specific skill sets to operate the seemingly arcane node based interface that really made little sense to the traditional NLE editor. You COULD edit with it, and some folks were, but geez, it was just so different from the basic skill set that all editors have. I would have to dedicate training at least one staff member on this one specific toolset, that’s not something I wanted to do. We’re a small shop and dedicating one person to a specific toolset just wasn’t going to happen, folks need to be able to easily move from application to application. This funky editor interface wasn’t easy to move to.

Number two complaint was the price. Around $15,000 for one license meant I had to keep that machine running a lot to make it worth the while to purchase and charge quite a bit more to use than my other systems. Budgets are shrinking today, we need to do more with less. Dedicating $15,000 just for the software for one workstation just isn’t feasible for my situation.

As recently as this past June I had a long conversation with Marc-André Ferguson of Autodesk and told him point blank, “it’s too expensive and I’m not going to buy it just so I can then have to train someone how to use this tool. The mechanics are so different to Adobe, Avid and Apple that it’s not worth my time or money to use.” Quite honestly, we had other, lower cost options, that performed just fine for our projects and client budgets.

ENTER SMOKE
Ok, look at that image. If you have used any of the “big three” NLEs (Adobe, Avid or Apple) this is familiar. Media Browser on the left, Source and Program Monitors, VTR controls, Insert / Overwrite / Replace commands, Timeline with Video / Audio Tracks…. The interface makes sense. Let me say that again. The interface MAKES SENSE. Marc-André told me this interface was designed so that any non-linear editor could pick up this interface in about 10 minutes. In fact, Autodesk has provided a Final Cut Pro 7 keyboard mapping preset so your years of muscle memory will work with the new Smoke 2013.

For the traditional editor, this is completely game changing. (ok, I hate that term because it’s overused, but this one time, it really does apply) We all knew Smoke was an incredibly powerful finishing tool. We now have a true storytelling tool to go along with all that finishing and visual effects power. One tool, one machine, complete end to end solution from ingest to media management to editorial to finishing to final output. It’s also designed to be easier to use for the traditional editor. I’m completely dumbfounded and giddy all at the same time.

ONE TIMELINE, MANY OPERATIONS

Here’s where Autodesk REALLY got it right for the editors. All the rest of the finishing features are launched from the main editing interface. Think about it like dynamic linking to other applications without the need to dynamic link, it’s all in one application. And you literally work from the same timeline throughout the process. The application simply switches to different modes for different tasks.

So you don’t “Send To” “XML To” “Export To” “Fill In The Blank To” anything to work with all of the tools inside Smoke 2013. Simply switch to the operation mode you want to do what you want. Need to do color grading? Switch to Color Grading Mode. When you’re done, switch back to the timeline. Switch to the Connect FX room to build a composite or key a green screen. There are a ton of right click contextual menus throughout the interface to make it very easy to get the materials where you need it. When you’re done with the task, you switch right back to your main editing timeline.

Oh and did I mention we’re editing natively throughout the process if you want? Yep, DPX only editing is gone although you can conform everything to a single codec if you’d like. 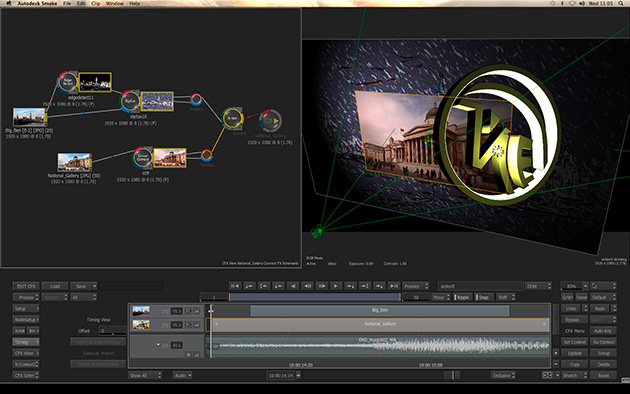 If you’ve worked in After Effects, this should look familiar to you as well. The video and audio tracks along the bottom clearly show your source elements. The 3D camera and lighting placement on the right makes sense. And even that node tree in the upper left makes total sense, especially if you played with Apple Color in FC Studio or Davinci Resolve. Autodesk has really gone through a lot of work to make the node concept much easier to follow.

Nodes are simply a visual representation of your elements and effects order or pipeline. The node tree runs in one direction, in this case, left to right and in the tree you can see the effects as they are applied, just like stacking up filters in the After Effects Effects Controls tab. The Big Ben image has both an Edge Detect filter and Stylize filter applied to it which are blended together. The National Gallery image has Color Correction applied to it. The two are brought together in a composite and what you’ll see back in your timeline is “National Gallery..

By the way, Connect FX was brought to Smoke courtesy of the much more expensive Flame. So not only has the priced dropped on Smoke 2013 and it’s gotten easier to use, they brought the visual effects power of Flame to the traditional video editor. 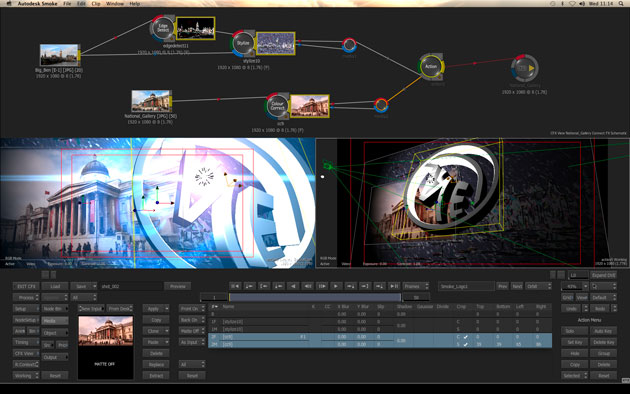 Will you need to spend a little time getting used to this vs. filter stacks? Yes. But remember, you keep working from the same timeline throughout the process. You just switch out the operation as you work, not switching applications. Because we keep working from the same timeline, I’m expecting to be able to deliver more refined cuts to my clients faster. Instead of waiting until the end to do green screen work in another app or adding some finishing touches like light flares or color grading, I can quickly add those things as I go. In fact I can essentially pre-treat any of my materials even before I throw them into the timeline. Green screen scene, color look, etc…, have them all created before they go into the timeline.

And in true Autodesk fashion, we’ll have true video and audio output via industry standard I/O cards and external boxes via the Kona 3G and IoXT. No funny, weird, you need to have a specific formula to get output to your reference monitors.

Media Management is one of the biggest hurdles in any digital post production workflow and Autodesk has worked very hard to make it a very easy to use element of the new Smoke. We can work natively in many formats, or the MediaHub will transcode elements to a central format before the edit starts. Organize and Ingest right through to archiving.

Again, look at the image above and it just makes sense to any video editor who has used traditional NLEs. Upper left is the main folder for your project and under that all of the media is organized. The highlights all show the type of media everything is, MOV, MXF, RED, etc… The RED Epic folder is selected so all of those clips are loaded in the Gallery. To the right of that we have full logging controls including all the metadata information you might ever want to add. You can string out some clips using the Timeline function.

Down at the bottom you see the “Publish” button. When your project is done, or you need to upload dailies for your client, the Publish function creates the files in whatever format you want, ala Compressor or Adobe Media Encoder. Again, this is all within the single application.

I’m barely scratching the surface of this tool because I could write a book about it and I’m trying to keep this article short enough to read. Suffice it to say, this is a very powerful media management tool that is almost worth the price of admission alone.

BUT DUDE, I HAVE AVID / ADOBE / FCP AND PROTOOLS AND AN ENTIRE PRODUCTION WORKFLOW ….

So I’ve recently announced that our facility is switching over to Avid for our broadcast work. Like me, many of you may have applications and established workflows and you don’t want to upset the boat just for the sake of a new application.

Smoke 2013 still fills its tradition role of a finishing tool and it can integrate nicely into your existing production pipeline. Send projects to Smoke from Avid, Adobe and FCP among others to have the work finished. Projects cut in Smoke can generate an OMF to be sent over to your audio engineer ready for a sound mix in ProTools.

In other words, Smoke 2013 is designed to integrate into your existing workflow just as well as it’s designed to stand alone. They really got this part right.

Wrong. I recently mused on switching over a lot of our “Big Iron” systems to iMacs. The iMac makes a great editing tool in a very compact space and both Adobe and Avid run fantastic on those machines. Looks like Autodesk was thinking along the same lines.

So all of this power without the need for the all powerful “Big Iron” system. You also don’t need to take out a loan to get the application with a new suggested retail price of just $3,495.

SO WHERE DO I GO FROM HERE?

So after seeing and hearing everything from Autodesk, I’m ready to start running this in our shop now, but the tool won’t be ready until the fall. Until then, I’m going to continue to bring Avid Symphony and Media Composers into the shop because they will integrate brilliantly into the Smoke 2013 pipeline. Once the software is available, we’ll most likely install 2 seats right off the bat on 2 “Big Iron” systems and then see where we go from there. I expect to transition a lot of our compositing / green screen work over to Smoke especially as third party filter developers start making their products available for the tool.

I can envision 5 or 6 seats of Smoke 2013 in my shop within the year for my primary on-staff editors while running 20 — 30 seats of Avid Media Composer on clusters of iMacs for the multiple series we’ll be cutting by 2013. Those will be predominately freelance editors and all they need is a cutting tool..

Of course, now that Autodesk has listened to us this far, there are a few other ideas I’d like to share with them……