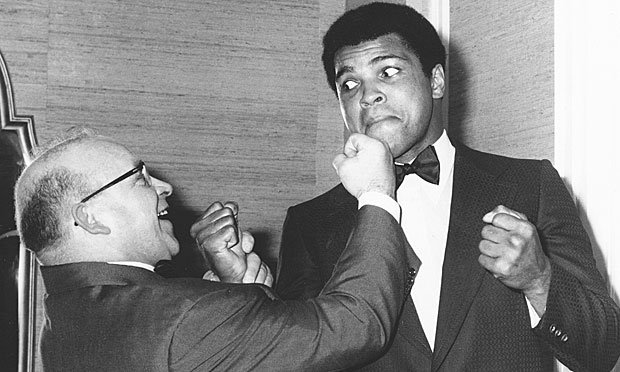 So its 2013 now and my year is getting off to a great start with tonights broadcast of “When Ali Came to Ireland” on RTE One at 6:30. This was a great documentary to work on, a cracking story that belts along with a eclectic mix of characters and a very unique Irish take on a chapter in the life of one of the most charismatic people in the world, Muhammad Ali.The film centres on the fight, in Croke Park, between Ali and the American challenger Al “Blue” Lewis, an ex-convict who miraculously won parole from a life-sentence for murder in his native Detroit. They were brought together in Dublin by an ex-circus strongman from Kerry, a colourful bar-owner who billed himself as “The World’s Strongest Publican”. I feel very grateful to have gotten the chance to edit the film, there were a couple days where you’d be looking at rushes of Ali and you’d be saying to yourself “Im working on a film about Muhammad Ali, how cool is that”. Frankly, its the reason why I love doing this job, spinning a yarn about a remarkable man and working with filmmakers operating at the top of their game.
Check out the trailer below (its received over 9000 hits on youtube which is incredible)

The film was made by filmmakers Ross Whitaker and Aideen O’Sullivan from True Films. The guys have been making films together for a number of years and are two of the nicest people you could meet. You can watch their multi award winning film “Bye Bye Now” below. The journey to get this film made took some time as director Ross whitaker explained in yesterdays piece on the film by Malachy Clerkin in the Irish Times

“There’s something about the story,” says Whitaker. “A lot of people almost forget it even happened, that Ali came here at all. But the one thing I found over the years was that for anyone who had even a small connection to it, it has lived on with them all this time. That’s why we kept at it over the years. The actual making of it was quite short but getting the go-ahead for it took quite a number of years. There was always something in my mind that was saying: ‘This story is really quite a bit special. We really need to get this onto the screen.’”

Joe O’Shea also wrote a piece about it in the independent just before the christmas. Joe and Malachy both attended a preview screening of the film in the IFI in mid-december. The screening was a great success and everyone at it really enjoyed the film. From a personal point of view, it was great to see and hear an audiences reaction to the film, its a treat you rarely get with tv documentary. Usually the show airs and while you might see some reaction on social media, its not quite the same as experiencing that reaction in the flesh. After the screening there was a lively Q&A with Ross and some of the contributors with people in the panel and in the audience sharing their recollections of Ali in Ireland. It was a great experience that I won’t forget in a long time.

“When Ali Came To Ireland” is a film I’m really proud of and I really hope you all tune in to watch it tonight at 6:30 on RTE One.