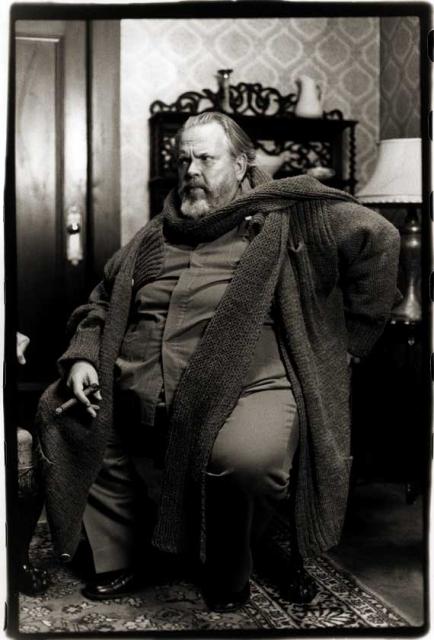 Cinema nerds rejoice or despair depending on your point of view. Welles has more lost masterpieces then actual films made but nevertheless it’ll be interesting to see what happens and what noted Welles authorities like David Thompson, Peter Bogdanovich or Simon Callow make of it all. We’ve had a lot of false dawns on this.

For nearly 40 years, Orson Welles’ final film –hailed by those who’ve seen the unedited footage as a “masterpiece” – has been locked in a vault. That could change soon, though, as ‘The Other Side of the Wind’ may finally get a release sometime in the very near future.

Shot way back in 1972, ‘The Other Side of the Wind’ tells the story of the last hours in the life of an aging film director. Welles described the project to John Huston (who was the star of the movie) thus: “It’s about a bastard director, full of himself, who catches people and creates and destroys them. It’s about us, John.” That quote alone has tantalized serious cinephiles for almost four decades now.

This isn’t the first time rumors of an official release of ‘The Other Side of the Wind’ have surfaced, but Los Angeles attorney Kenneth Sidle — who’s been involved in the ownership dispute –- told The Observer, “We are in negotiations for the picture, which would lead to the finishing and public exhibition. Hopefully within the next few weeks, we will know.”

Welles told various sources that ‘The Other Side of the Wind’ was “96 percent complete” in 1972, but like many of the filmmaker’s personally funded films, production dragged on for years after that statement. He reiterated that it was “on the brink of completion” in 1976, and by 1979 had edited 40 minutes of the footage to his satisfaction.

Unfortunately, 1979 was when things started to go bad for the project. Welles had accepted funding from the brother-in-law of the Shah of Iran, who was overthrown. This kicked off a lengthy legal battle that involved the Shah’s brother-in-law (and now his widow), Welles’ lover Oja Kodar and Welles’ daughter Beatrice.

Sidle, who represents the widow, says both she and Kodar are willing to sell their rights to the film and that whoever buys it will be able to complete it, which opens up a whole other controversy.

Some wonder if the film should be completed at all. Welles left his friend Peter Bogdanovich extensive notes about editing the final cut, but even with those notes from the filmmaker, some argue that the vision will be compromised if anyone else does the cutting. Those against the editing suggest that the film be released in its rough format without interference from an editor who wasn’t involved with the project. Those same people insist that ‘The Other Side of the Wind’ will be just as captivating in its unedited form.

Perhaps the best thing that can happen here is that someone will acquire the rights, edit it according to Welles’ notes, and release a DVD featuring the edited version as well as the rough cut. Then everyone would be happy –- in theory. As contentious as the battle for this film has been for the past 40 years, it seems that nothing is a given at this point.

Whatever the outcome, maybe audiences will finally get to see this long lost film from one of the world’s greatest filmmakers. Let’s all cross our fingers and hope for the best.