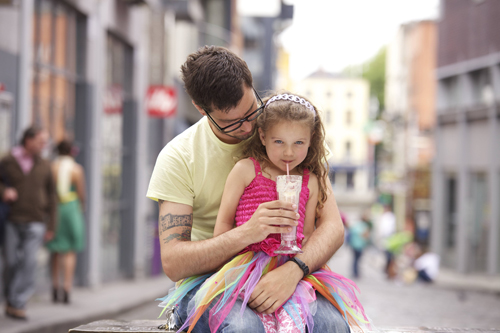 Several weeks ago I wrote a post about my friend Traolach’s lovely short film “Alive” and how he needed people to watch it for the competition he had entered. Well, the good news is that he only went and bloody won the thing. It still isn’t exactly clear what the nature of his prize is but he definitely won something. As the winner of the competition Cassie Delaney went and interviewed him for the Film Ireland website, an interview I shamelessly have reproduced in full beneath

Traolach Ó Murchú has an unconventional approach to casting. Taking to his Facebook page on the 9th of July he types: ‘Looking for a baby for a very quick shot for a short film in Temple Bar tomorrow… That’s right, a baby this time…’
When I meet Traolach at the Filmbase headquarters in Temple Bar, I soon realise that nothing about the filmmaker is particularly conventional. From his Cork twang to his love of one-legged, recession-thwarted pigeons, Traolach is certainly not what one would expect of a media savvy filmmaker. Temple Bar is buzzing. There’s some sort of exhibition going on in Fimbase. Suited men stand smoking in doorways avoiding the light rain that has begun to fall. I feel slightly underdressed, but Traolach who wears a blue checkered shirt and jeans looks at home. And why wouldn’t he? This is his turf. Temple Bar is his territory.
Traolach is the winner of the recent filmbase ‘Made in Temple Bar’ competition. His online short Alive depicts the area’s multi-faceted personality through a montage of colourful scenes. Traolach explains how he got under the skin of Temple Bar. ‘I spent 6 hours walking around Temple Bar and the art director spent a day strolling around and we made a list; these were the people met, these were the places. We put together a list of scenes and then like scrabble we tried to fit them all together,’ he says.
A particular success for Traolach is that he manages to capture the essence of Temple Bar, an area often void of rhyme and reason, and connect its different characters and landmarks in a way that is not only coherent, but highly enjoyable. Each scene leads intentionally into the next. Some were more successful than others: a woman blotting lipstick leads to a pair of lips on the Wall of Fame, a couple french kissing leads to a tongue piercing. Some however, appear slightly more disjointed but Traolach explains his reasoning. He smiles as he says ‘you went from a guy drinking to a guy vomiting to someone chopping carrots. But as far as I am concerned, carrots are always part and parcel of vomit, you know – even if you haven’t eaten them.’
Alive can under no circumstances be described as an indulgent film. Traolach upholds a complete commitment to his subject; something that is evident in his aspiration to shoot entirely in Temple Bar. ‘The carrot scene was one of the longest to shoot, which seemed ridiculous. Everyone asked why don’t you just do that at home? I was like ‘God Dammit no. We said we’d shoot entirely in Temple Bar and that’s what we’ll do,’ he says. Still, from the grin that emerges on his face when he jokes about vomit adorned with vegetables, I can tell that some of the scenes were created, perhaps, for his enjoyment.
For Traolach, the film was a learning curve. Under tight time constraints, he was thankful of the brief and he says he knew exactly how the film must be made. Working with an art director was a huge help he says and he cannot speak highly enough of his crew. ‘Working with an art director was something I’ve never done before but it made such a difference, I’ll definitely be doing that again.’

It is obvious, even in the short space of time I spend with Traolach, that his is a mind that it constantly at work. While we talk, he looks around at those who surround him. At one point we discuss a man who stands alone, each guessing what his story is. It is obvious that Traolach is intrigued by people and by his surroundings. In conversation he asks as many questions as he answers and it is hard not to veer off topic when talking to him. Traolach is the definition of a ‘people person’; a trait that I suspect will ensure his success as not only a filmmaker, but also a story teller.
Of course, a vivid imagination is also at work. There is a certain spark in Traolach when we joke about a film about one-legged pigeons in recessionary times. What begins as a joke quickly turns into an elaborate plot, and though he knows the chances of actually having such a film funded are slim, it is clear that Traolach would be capable of turning even a whimsical idea into something extraordinary.
At the heart of his filmmaking lies a simple desire. To meet people and tell stories. When we talk about money, the dark cloud above the artist’s head, Traolach is frank and realistic. ‘The money doesn’t go far, it’s expensive to get a film made. It all adds up,’ he says. So why, I ask, does he persist? ‘Oh, I love it,’ he answers. ‘I just love it. I love the process of making TV or film. I love working with other people. Yeah you have your cameras and your lights and your scripts and your budgets but it comes down to working with people and that’s just a great buzz.’ 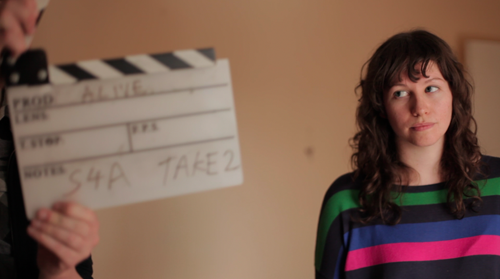 When questioned about potential new projects, Traolach becomes enthused, telling me about the subjects and places of his proposed documentaries. Documentary filmmaking ignites a particular passion – a desire to present real people. ‘The nice thing about documentaries is the people you meet are just so different to those you would usually meet, and they’re real. Its not fiction, you get that feeling of ‘I can’t believe this actually happens’”.
With everyone on an even technological plain, Traolach believes that the story must triumph over the aesthetics of a film. ‘Everyone can have a DSLR camera and get beautiful pictures. You see a lot of stuff online that looks great but its harder to find good stories. I think the story is suffering a little bit, because everything looks beautiful. So it all comes back to the story if you want to stand out.’
Like his films, Traolach’s ambitions too, are simple. I try in vain to unearth the dream, but with a sensible head on his shoulders Traolach misses the mark when I ask him where he sees himself in ten years. ‘Canada,’ he replies, before realising that the question was not, in fact, in reference to geographical location. He laughs. ‘Oh yeah, making films, I’d love to be doing that. I’m realistic about it too though, its a small industry.’
So yes, Traolach is unconventional. He’s simple and honest. He doesn’t have a burning desire to make blockbusters or millions of euro. He wants to create something beautiful and enjoyable. In his own words he wants ‘to do something that does okay, something that stands out. Something that people actually want to see.’ He wants to capture people, places and passions. Yes he wants to make films, but more than that – he wants to tell stories.